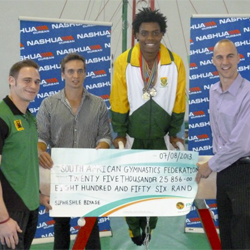 Good luck to Siphesihle Biyase who is competing at the Artistic World Championships in Antwerp, Belgium this week.

This will be Siphesihle’s first competition at World Championships level. This was all made possible by his sponsorship by NASHUA DURBAN. 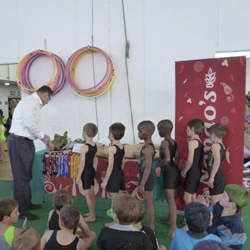 Congratulations to all that took part in the recent KZN Levels 1-3 Team competition held at the KZN Artistic Academy.

It was a very successful event and it seemed that all the gymnasts had a lot of fun. 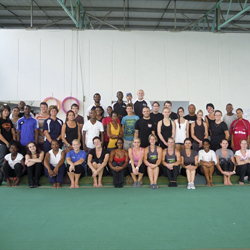 The class of 2013 at the GL Coaches course, run at the Artistic Academy over the weekend 2&3 March 2013. 39 Enthusiastic coaches from all over KwaZulu Natal came together for a weekend of learning and sharing ideas. Many thanks to the facilitators under the guidance of our course coordinator, Tammy Johnson. 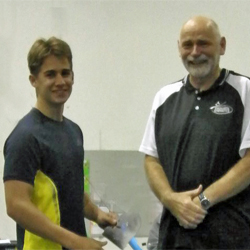 CONGRATULATIONS to all award winners at the recent KZN Prize Giving held in Pinetown on the 30th November 2012.

Some photos are available on our gallery page.

Jennifer back on the World Stage 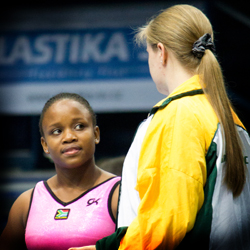 Jennifer has been out of competition for the last year, recovering from an ACL (Anterior Cruciate Ligament knee) Injury that she sustained in Korea during a competition. She has worked steadily to regain her strength and skills and this competition shows that hard work pays off !

Jennifer qualified tie 4th in the Vault qualifiers and then also placed in the same position in the finals, as well as 8th in the floor finals winning herself some Swiss Francs as a bonus, as well.

Well done Jennifer and Julie. Keep up the hard work !! 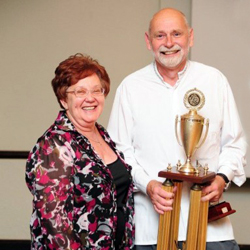 CONGRATULATIONS to Allan who recently won the South African Gymnastics Federation ‘Administrator of the Year’ award. What a brilliant achievement !

Allan was also rewarded for his long service as a National Board Member. He has worked very hard in various positions on the SAGF Committee for countless years and has contributed endlessly to gymnastics not only in KwaZulu Natal, but South Africa as whole.

One of his greatest contributions to RSA gymnastics is his Preschool & General Gymnastics programs and enthusiastic, child-centred approach to coaching. He has also been responsible for much of the admin side of things, such as club management software & competition scoring software, competition manager at numerous competitions, Brevet Judge, National Team coach. The list seems endless.

Well done Allan !! We are all very proud of you.